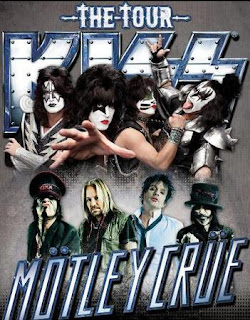 I purposely waited a few weeks before I reviewed the opening night of what’s dubbed The Tour – Motley Crue/KISS in Bristow, VA.  Before I sat down to write the review, I wanted to see YouTube clips of both bands and read accounts from subsequent stops on The Tour.  Having let a few weeks pass, I now am ready to write…

I should say at the outset that I have been a KISS fan for 33 years.  They are my second favorite band of all time.  This was the twelfth time I’ve seen them in concert.  They have always been one of the best live acts I have ever seen.  Through the years, the stage shows have varied in their level of theater and the set lists have ranged from a concentration on old songs to new songs to everything in between.

This was my first Motley Crue concert.  They’re a band who I've grown to respect as the years have gone by – in large part due to the Led Zeppelin-esque excesses recounted in their autobiography, The Dirt.  Of the ‘80s Pop Metal bands, they have certainly turned out to be one of the best – both in terms of survival and catalog of songs.  Motley Crue are the bastard sons of KISS….

The Crue came onstage in a procession through the audience accompanied by Medieval Motley Crue flags, stilt walkers, and masked henchmen in orange jumpsuits who unsettlingly resembled Clockwork Orange Droogs ready to perform an evening of Ultra-Violence on the audience.  The stage motif was industrial-warehouse-meets-madhouse-circus-amusement-park-meets-Hell.  From the opening strains of Saints of Los Angeles through Wild Side and Shout At The Devil and Looks That Kill and Dr. Feelgood and Girls, Girls, Girls and other staples, right on through to the Kickstart My Heart closer, the show felt like a fiery rollercoaster gone wild.  About the only time, the Motley rollercoaster let the audience catch their breaths was during Home Sweet Home.  Throughout the controlled and orchestrated mayhem, the Motley Droogs set off balls of flame and fired water rifles, two buxom aerial acrobats gyrated on floor-to-ceiling ropes like strippers on a pole, and two more hotties sang back-up vocals.
﻿﻿﻿﻿
The ringmasters of this circus in hell were lead vocalist Vince Neil, bassist Nikki Sixx, guitarist/Cousin It Mick Mars, and drummer extraordinaire Tommy Lee.  If The Dirt chronicled their years of sloppy, drugged-out excess, then The Tour finds the Crue in the shape of their lives.  What a difference sobriety makes.  Vince hit notes that he never could in tours past.  Nikki maintained his Motley creative puppet master role, brandishing a flame-throwing bass, Mick’s solos were spot-on….and then there’s Tommy…

Tommy Lee deserves a paragraph to himself.  Don’t let the wild man, vapid, Heather Locklear/Pam Anderson/porn star ladykiller history and reputation distract you.  Tommy plays drums like the virtuoso he is.  Even when other drum virtuosos solo, most of the audience takes the opportunity to visit the restrooms and beer counters.  Not Tommy Lee’s audience.  His drum solo was played to a back-up tape of house music composed by Tommy….Oh, and did I mention that his drums are on a circular rollercoaster?  Tommy strapped the wife of a military serviceman with him and took her on a 360-degree ride of her life.

Motley Crue might just be the best live band to come out of the ‘80s alive.

They descended onstage from a spark-spewing platform on the venue’s ceiling.  The stage resembled a lit-up Las Vegas set of bleachers.  The floor-to-ceiling KISS logo was video projected, and alternated with celluloid close-ups of the band.  There were enough lights, fire, and explosions to awaken and destroy a major American city.  Paul Stanley zip-lined over the audience to a revolving auxiliary stage in the middle of the crowd.  Gene Simmons flew up to a mini-stage atop the lighting rig.  Guitarist/Ace Frehley impersonator Tommy Thayer shot sparks from his guitar.  Drummer/Peter Criss impersonator Eric Singer levitated behind his massive drums.  A confetti blizzard covered the audience like they were in the “Canyon of Heroes” in NYC.
KISS incorporated all the staging highlights of previous tours into one massive bludgeoning feast for the senses.  Yet something was amiss.  Perhaps the culprit was Motley Crue’s stellar set that preceded them, set the bar far too high, and ultimately stole the show.  By comparison, the KISS stage seemed oddly less theatric and – dare I say it – slightly more subdued and lower budget.  No.  The culprit was something far more basic and seemingly insidious.

What most critics and non-fans always missed about KISS was that all the makeup and pyrotechnics was really just icing on the cake.  Behind the circus was a great rock band.  Like the critics and non-fans, on this evening, the members of KISS seemed to forget that as well.  The weakest aspect of their set was what should have been one of their strongest weapons – the songs.  For a band with such a deep well of classic songs, on this opening night, they picked only a handful of their most perennial numbers; padded it with too many mediocre songs; wasted too much time on unnecessary guitar, drums, and bass solos; and worst of all, steamrolled through the songs in an abbreviated set that even felt rushed.  Their other usual strongest link proved to be somewhat less than that as well – Paul Stanley.  Here is one of rock’s greatest singers, yet he only sang lead vocals on five of the thirteen songs in the set.  That might have been fine, but what replaced the songs he could have performed were plodding, mediocre songs by Gene Simmons – not one of rock’s greatest singers.  In an already abbreviated set, there was no reason for Simmons to sing God Of Thunder AND War Machine – essentially the same songs.  I Love It Loud could have been shelved as well.

There also was some question about the state of Stanley’s voice.  Hardcore KISS fans know that 2009’s Sonic Boom album featured a slightly raspier Stanley.  During the band’s last tour in 2010, Stanley’s voice was very hit-or-miss depending on the night you happened to catch them.  Belying a larger issue, Stanley underwent throat surgery last year.  On this opening night, Stanley seemed to struggle on the vocals in spots.  He didn’t help himself by straining to do vocal gymnastics during his infamous between-song raps.

Perhaps what was most disappointing about the show was the band’s seemingly blatant display of insincerity.  Just before the climactic Rock & Roll All Nite, Stanley announced that they were willing to play all night, but would have to cut their set short because of Bristow, VA’s curfew law.  It was disappointing news to hear at the time because the audience would have liked the party to last longer. However, having seen the band’s set list from subsequent shows, it’s now apparent that the show was not cut short.  They play the same 13 songs every night…and Stanley uses the same “excuse” to explain away their short set.  In fact, it seems like a tacit admission that even they realize that true fans are going to feel a bit short-changed.

Hey, Paul.  Why not just say good night, and not make it seem like you were going to play more songs, but Johnny Law wouldn’t let you?

Stanley may not be lying, but he does seem a bit disingenuous.

I realize that I sound like an insatiable, spoiled child.  Did KISS put on an elaborate show?  Yes.  Did they play big hits?  Yes.  Did I have a good time?  Absolutely!    However, for the nearly four decades that KISS has been playing, they’ve set their own bar – and the bar of others – so high, that anything short of the moon seems like a letdown.  With Motley Crue reaching and surpassing that same bar, KISS just seemed a slight bit underwhelming and as if they were going through the motions.

Postscript:  Check out the YouTube clips of KISS at their backstage meet-and-greets.  For the lucky few who’ve paid hundreds of dollars for the privilege of an audience with the Pope – er, I mean, KISS – the band plays an unmasked mini-semi-acoustic set of KISS classics.  Perhaps if they’d incorporated those songs into their official set…
Posted by Rtunes68 No comments: