“The mouse that roared” is a phrase that comes to mind after experiencing The Joy Formidable in a live setting.  That a three-piece band comprising mostly just one guitar, bass, and drums can produce such a massive wall of sound is both a pleasant and bludgeoning surprise.  What’s more remarkable is that amid this glorious sonic boom, the band coaxes so much melody and produces infectious songs that have an obvious pop sensibility. 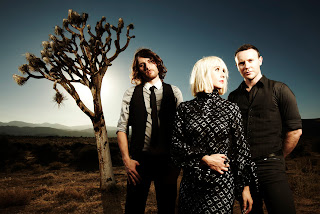 Opening with Cholla, the first single off their latest album Wolf’s Law, the band launched an aural attack that rarely abated.  The few moments of respite came when bassist Rhydian Dafydd played keyboard intros or acoustic guitar (Silent Treatment).  Lead singer and guitarist Ritzy Bryan produces much of the aforementioned roar, but it’s Dafydd and drummer Matthew James Thomas who keep the songs from derailing into noise with their precise and surprising groove.  Smartly, in a live setting Dafydd’s bass is turned up in the mix to give the song parts clarity and structure, and not just a low-end thumping.  While Bryan provides a great focal point to the band and Dafydd seems to navigate the proceedings, it’s Thomas who brings the fun rock & roll madness.  Watching his enthusiasm, technique, and humor (!), one can’t help but think of John Bonham, Keith Moon, Tommy Lee, and Animal from the Muppet Show.

Having seen them once before on their last tour in a relatively small church that doubled as a rock venue (!!!), it was fascinating to see their adaptability and growth as a band in a real rock club setting.  Their songs and musical ability are a given.  However, they upped their game by incorporating Rock Show elements like video projections and an omnipresent wolf logo whose lights changed colors.

Musicians and non-musicians alike have an obnoxious penchant to compare every band to some other band – “Oh, so-and-so sound just like (fill in the blank)…”  From the band’s perspective this can be complimentary, derogatory, or sometimes just plain baffling.  Compliment or not, it’s often unfair to the band because it ignores the amount of personal creativity and work that went into producing the music, and reduces it to a comparison.  I make this admission as a disclaimer because I’m about to do exactly what I just got done railing…The Joy Formidable are reminiscent of Smashing Pumpkins at their best…and what Sonic Youth tried to sound like (but never could).  I say it as a supreme compliment.

Posted by Rtunes68 No comments:

Fleetwood Mac: Living Up To The Legend 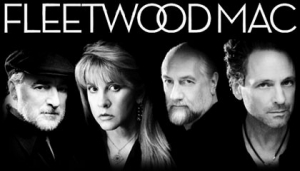 All too often, the legend of a band is better than the reality.  Luckily, for the nine-year old in me who first fell in love with Stevie Nicks from the gatefold of the Rumours album while listening to Dreams on a record player in my cousin’s basement all those years ago, Fleetwood Mac is a band that lives up to its legend.  Their performance at DC’s Verizon Center was stellar.

The signature Mac sound remains wholly intact with no regard to the calendar.  The unmistakable rhythm section of Mick Fleetwood and John McVie is still one of rock’s all-time finest, as the two practice what Keith Richards refers to as “the ancient art of weaving.”  Obviously, there’s also Lindsey Buckingham and Stevie Nicks – soulmates who still harmonize the most endearing love songs one minute, and deliver the most viciously blistering barbs to each other the next.  The internal drama, soap opera, and emotional baggage also all remain palpably present.  Although with the passage of time, the band seems to approach their music and its inherent baggage with a sense of perspective, maturity, acceptance, and a whole lot of humor.

A triple shot from Rumours – Second Hand News, The Chain, and Dreams – set the pace for the next two hours and forty minutes, as they performed hit after hit flawlessly from arguably the greatest catalog of the ’70s So-Cal Sound (…although The Eagles might take exception to that title).  Aside from all the ubiquitous hits, the band also debuted a new song, Sad Angel, that sounded as familiar and comfortable as any of their classics.  Buckingham’s solo turn with Big Love highlighted the fact that he might be the most underrated guitarist in rock.  Nicks took a non-Fleetwood Mac spotlight with her ‘80s solo hit Stand Back.  The evening’s best surprise was a pair of songs from the pre-Fleetwood Mac Buckingham-Nicks album.  The fact that hardcore fans have to resort to YouTube to hear this out-of-print pop gem of an album is criminal.

The one obvious quibble with Fleetwood Mac’s show is that they overlooked all the Christine McVie hits.  While it would’ve been a fitting tribute to the retired McVie if they covered her songs, perhaps the omission also is recognition that she can’t be replaced.

It should be noted that the evening’s MVP Award goes to Fleetwood Mac’s sound engineers.  While arenas like the Verizon Center are designed primarily for sporting events – not for acoustics – on this evening, the band sounded like they were performing in a controlled studio.  To my recollection, no band has ever sounded so good in what’s essentially a hockey arena.  The sound engineers achieved perfect separation and balance between instruments and vocals on the loud songs, and on the quiet songs, you could hear a pin drop onstage.

Legend aside, perhaps Fleetwood Mac’s greatest achievement of the evening was living up to the wide-eyed expectations of my inner nine-year old.

Awthentik and The FIF: Who Said You Can’t Pull Off Hip-Hop Live?

My favorite musical partner-in-crime and I decided spontaneously on a recent Thursday night to visit The 8x10 in Baltimore, MD to drop in on the local music scene.  Not knowing at all what to expect – perhaps the best way to discover new music – we watched rapper/producer/engineer Awthentik front a band called The FIF...and tear the little playhouse down!

My long-standing complaint about 99 percent of hip-hop artists – no matter what level of fame and notoriety they’ve achieved – is that they can’t pull it off live.  To hide their inability to perform live, most resort to bringing out an entourage of 35 of their closest buddies onstage and yelling shout-outs or the incessant and oh-so-original, “Wave yo’ hands in the air…”  At best (or is that worst?), they rap to pre-recorded backing tracks.  I’m looking at you, Kanye!

Awthentik and The FIF belong to that rare one percent.

As a rapper, Awthentik has all the flair, flow, and swagger of the biggest of ‘em – Jay-Z, Naz, Common, Q-Tip, etc.  The five-piece FIF, backing up the rhymes, are super-tight and super-funky and…here’s what sets them apart from most others playing in a small club….they sound HUGE without over-playing or sledgehammering you with sheer volume.  The FIF achieve the perfect laid-back-but-intense funk backdrop for Awthentik’s raps with just the right amount of modern-day keyboards/sampling over vintage Soul Train-worthy guitar, bass, and drums.

Awthentik’s website claims that his music “brings a fresh approach with a recognizable flavor from the ‘Golden Era’ of hip-hop.”  I have to disagree just a little bit because….when Awthentik and The FIF are rockin’ the party, this is the Golden era of hip-hop.
Posted by Rtunes68 No comments: 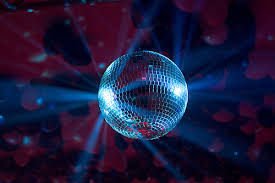 Can anyone seriously make the claim that a particular year in music was better or more important than another?  Given the subjective nature of the subject, probably not.  At best, it makes for a great semi-drunken debate among your music-nerd friends.

All that said, 1975 was the greatest year in modern music!

I could actually go on, but you get the idea.  Just the albums I’ve listed are either one of the artists’ career bests or, in some cases, the start of an ascent to some of their best works.  Some of these albums also have proven to be seminal to an entire generation of musicians in the ensuing years.  If all this sounds like the hyperbolic love letter to a year in music from a writer getting on in years, then I defy you to look no further than your local Classic Rock or Oldies station.  Unlike almost any other year, songs from 1975 dominate the regular playlists of these stations on any given day in 2013.

Even bubble-gum pop reached an odd sort of zenith in 1975 in that an inordinate number of those songs has outlived their successors in the hearts and memories of people and with radio station program directors – Rhinestone Cowboy (Glen Campbell), My Eyes Adored You (Frankie Valli), Sister Golden Hair (America), Mandy (Barry Manilow), Cat’s In The Cradle (Harry Chapin) – are you singing some of these songs to yourself already?...

…And then there was disco.  By 1975, disco had reached underground phenomenon status and was just bubbling under the national consciousness, but hadn’t quite skyrocketed into the decadent Tony Manero-loving coke-fuelled stratosphere, and was still a few years from its inevitable Disco Duck-ie comedown.  Yet at the moment that the genre was about to reach the national zeitgeist, it produced some of its most stellar and longest-lasting hits…Love To Love You Baby (Donna Summer), Lady Marmalade (LaBelle), Jive Talkin’ (Bee Gees), Pick Up The Pieces (Average White Band), The Hustle (Van McCoy)…and if you're too young to know some of these songs by name, trust me, you'll recognize them within the first few notes of hearing them.

Almost 40 years on, the midpoint of the much-maligned 1970s has all the feel of a watershed moment in music when even disposable pop still retained a sense of art and craftsmanship, and rock was at that very final and purely artistic moment before it all became a wholly-owned subsidiary of corporations.

Sure, there’s been great music produced in the past four decades.  Even in today’s short-attention span, fractured, download culture, when albums are novel dinosaurs, great music is still being produced.  However, we may never see another year like 1975 when pop, rock, and even novelty hits, all seemed to reach a simultaneous crossroad of artistic merit, AM-Radio Gold, and polyester tail-feather shaking grooviness.
Posted by Rtunes68 No comments: