Time Waits For No One...Unless You're "Vintage"

“They sure don’t make things like they used to…”  It’s one of those trite phrases that someone who’s inevitably old says about anything that's not old.  Skepticism is usually a good response to such statements.  If everything was so great back then, why am I texting on my smart-phone, listening to leaked downloads of Lady Gaga’s next album on my iPod, and relying blindly on my GPS to get me to the next sentence?  Instead, shouldn’t I be looking for a pay phone, listening to Grand Funk Railroad's latest cassette with my ears pressed up against the 20-pound Sony boombox on my shoulder, and wandering lost in the streets?
As much as I’d love to wallow in my own smugness, my assumptions about the superiority of all things new were proven wrong recently.  Sometimes it’s actually true - they don’t make things like they used to.  I realized this when I was introduced to the world of vintage and antiques.  I always viewed antique items (unless they were cars or guitars) as curiosities, and the people who seek them out as curious eccentrics, at best…and downright goofy, at worst.  I also assumed incorrectly that antique stores were graveyards for old junk and that their customers were nothing more than affluent junk collectors.
What changed my mind?  Well, I recently accompanied my friend on her year-long quest to find antique clothing racks for her vintage store.  Initially, my curiosity was piqued because it seemed like such a meticulously particular search for something so obscure.  Not knowing what to expect, I was amazed and somewhat amused to discover the places her quest led us.
First, we drove from the let’s-gentrify-and-homogenize-everything ethos of Washington, DC to the coolly artsy-without-trying-to-be Williamsburg section of Brooklyn to a warehouse loft space and home of a collector of vintage artifacts – cameras, iron electric lamps, schoolhouse stools, and other miscellaneous items.  To crank up the otherworldly volume to eleven, his cluttered space was divided into three smaller apartments walled with fake wood paneling held up by rows of industrial plastic ties.  The place was best described as “Jabba the Hut’s lair meets Beetlejuice" chic.  The monsoon-in-Vietnam-like rain outside and the décor of the place seemed fitting for the overall “search for the Holy Grail” vibe of the day.
The guy had not one but two vintage clothing racks.  The racks were like none I’d seen before.  This wasn’t some mass-produced piece of molded alloy spray-painted chrome from your local Wal-Mart.  It was entirely hand-crafted cast iron and stood on an ornate base, and was very obviously the work of an artisan.  I imagined they were once on the third-floor ladies-wear department at an R.H. Macy’s or Abraham & Strauss in the garment district during the 1930s.  On one level, the rack was just an old object (and I’m nerdily waxing poetic about it).  Yet it was also a unique hand-crafted relic from long ago that wouldn’t seem out of place in a museum.  My friend selected the better of the two.  Carrying the heavy rack to my car, it occurred to me:  “They sure don’t make things like they used to…”
Then, we visited an antique store in the neighborhood called Luddite.  The place looked like a cross between someone’s dimly-lit attic and an old movie set, featuring everything from glass showcases and bell jars to nautical lamps and slightly creepy long ago-taken family photos, to wrought-iron chairs and mannequin hands wearing heirloom baubles.

The owner seemed to fit in perfectly with the ambiance, as he had the look of a rural villager or a younger, hip version of the old peasant on the cover of Led Zeppelin IV. 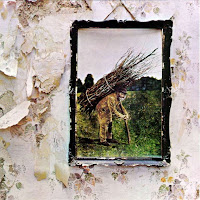 He explained to me that his customers are often collectors and set designers for movies (so much for my theory of junk collectors…).  Here we found an even more impressive-looking rack made of burnished copper.
Who knew there was such an underground market for antique clothing racks?  Who knew an entire thriving alternate universe centered around long-forgotten artifacts existed?  Who knew that vintage and antique items are sometimes of greater value and better quality than what's being manufactured today?  Who knew my iPhone-carrying friend was so attuned to this arcane niche?
I’ll just have to ponder these questions as I look for a pay phone, listen to Grand Funk Railroad’s latest cassette with my ears pressed up against the 20-pound Sony boombox on my shoulder, wander lost in the streets, and think to myself:  “They sure don’t make things like they used to…”
Posted by Rtunes68 No comments:

"God is really only another artist..."

"...He invented the giraffe, the elephant, and the cat. He has no real style. He just keeps on trying other things.” - Picasso

...Such a brilliantly provocative and deadpan-humorous observation.  So was this Picasso's John Lennon "We're more popular than Jesus now" moment?  Was Picasso saying God's an artist - just like him?  Or was he declaring that he's just like God?
Whatever the meaning or motivation behind the statement, it appears on the ceiling at the very end of Picasso: Masterpieces from Musee National Picasso, Paris, a traveling exhibition of essential works from Picasso's personal collection.  The 176-work collection, on tour while the Paris museum is undergoing a year-long renovation, includes paintings, drawings, sculptures, and etchings by the artist and serves as a retrospective spanning each notable artistic period of his eight-decade career.
One could drone until next Thursday about Picasso's pre-eminent stature that casts a shadow over all other artists of the 20th century, his indelible influence on all future art, his...I'm droning on even as I write about droning on about Picasso, aren't I?  What new can be said about the man that hasn't been said already?  Well...
...What hasn't been commented about quite so often is the inherent humor that Picasso possessed.  Whether subtly or not so subtly, intentionally or unintentionally, there is a distinct tinge of humor underlying some of his essential works.  Perhaps it's his very Zeus on the Mount Olympus of Art stature and the awe that is demanded from people who must kneel before the altar of Picasso that makes this facet of his work go largely unnoticed.
For example, his series of portraits of his lover and muse Dora Maar seem to chronicle not only Maar's mercurial moods, but also Picasso's equally bipolar regard for her.  There is a perversely humorous arc from muse to "woman in tears" to hideous wailing beast.  In fact, Picasso's regard for Maar takes such an over-the-top downward spiral that if it were put to music, it would sound like a Gun & Roses song.  In Picasso's eyes and merciless hands, Dora Maar devolves from Sweet Child o' Mine to I Used To Love Her (But I Had To Kill Her).  All that's missing is a three-headed Slash playing a Cubist guitar solo at the edge of a windy cliff. 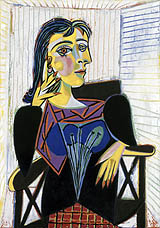 Picasso's sculptures also are as humorous and whimsical as they are inventive.  For example, his She-Goat, like most of the other sculptures in the exhibit, is made entirely of household objects, miscellaneous leftover scrap pieces, and tools.  The goat's head is made of a bicycle seat and handlebar. 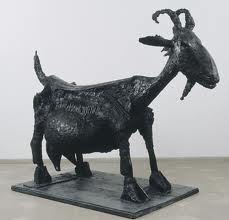 Another piece Tete de Femme (Head of a Woman) is formed by the welding of two colanders with bedspring hair, making it look like the morphing of a Fraggle robot with a Metropolis-era Barbarella.  Much of the fun and awe of viewing Picasso's sculptures is in trying to figure out what mundane objects he transformed into artistic masterpieces.

To quote Picasso again, "Only put off until tomorrow what you are willing to die having left undone."  Less eloquently put, go see this astonishing exhibit before it's too late.  Its next stop is San Franciso. However, you also can see it once it returns to Paris...and don't forget to laugh.
Posted by Rtunes68 No comments:

What happened to the hammer of the gods?  Are they all exiled to a lazy little Main Street somewhere on Mustique or between Madison and East 76th?  Ground Control to Major Tom.  Your circuit's dead.  There's something wrong.  Can you hear me, Major Tom?

Has the sun also set on those whose lives are as epic as their fiction?  Have all the denizens of the Bateau Lavoir abandoned their seats at Lapin Agile for the non-smoking section at the Chili's out in the suburbs?  Sorry, Scott and Zelda couldn't make it.  They're meeting with their marriage counselor before picking up li'l Frances Scottie at the sitter's.
Sadly, Modigliani is now a graphic designer.  Kiki de Montparnasse is an administrative assistant at a law firm.  Hemingway writes within the confines of corporate communications.  The Rolling Stones haven't put out a decent album since Tattoo You...and everyone shops for clothes at the same LL Beanana Republic at the mall.
Does the idea of a satisfying Tuesday night leave you longing to stagger out of your own Electric Ladyland and into a dive on Bleecker for a quick beer with Debbie and Chris; then hailing a cab up to Max's Kansas City to do a shot with Mssrs. Pop, Reed, Johansen, and Thunders; and then getting the Big Deal in the back of a limo (honey!) with a Nicaraguan super-model, en route to MoMA's evening with Andy and Vivienne?
Where are the lost Tyrannosaurus Rex who stomp the cultural landscape?
Did an era like this ever really exist?  Does it still exist?  Perhaps just beyond the din of the pedestrian.  Read on....
Posted by Rtunes68 No comments: